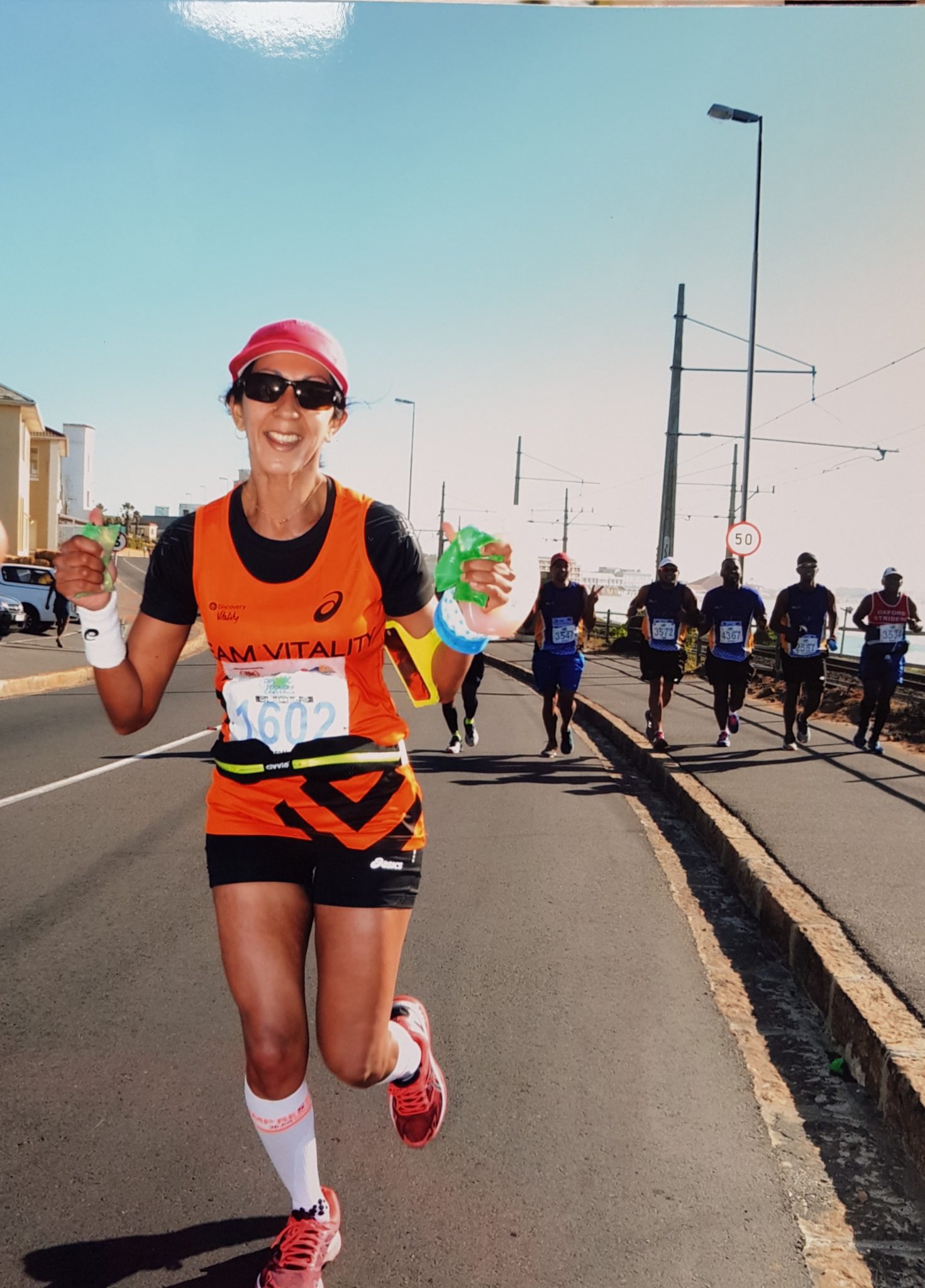 By: fitlikemummy
In: Fit Fitster, Women
With: 0 Comments
I recently wrote a blog-post about my insane love-hate relationship with running. As already mentioned, my hate for running stems back two decades when I did Basic Military Training in the South African Air Force. The idea of someone screaming at me and making me run for 3 months straight was enough to put me off running for a lifetime. That was until I met Jayindri Shanmugam.  We met the same way I met Botle Kayamba, at the Women’s Health event held at The Cookery.  Ever since, Jayindri has been encouraging me to pursue my running.  She’s the little angel sitting steadfastly on my shoulder reassuring me that if she can, so can I.  We recently got together to chat about all things running.

1. How did your life as a runner begin?

Five years ago (at the age of 40) I went for a standard medical checkup, and the doctor asked if I exercised, I responded that I had two daughters and they kept me active. The doctor in turn wrote down Sedentary.  So for some unknown reason this was my wake up call.  It really was my aha moment.  I must admit that I didn’t start running immediately.  At first I did the Women’s Health Magazine DVD called “Look better naked”  and I slowly grew in confidence as well as in my fitness.

2. When did you start running

It was my mission to get fit at 40 after that doctor’s visit. Once my fitness was up I started running and started with a little 2 or 3 km and used the Nike app.  My goal was to complete a 5km or 10km. My first race was the Spar race which I did with my daughter who was 12 at the time.  Before I knew it I was doing a 10km and had convinced my husband to join me.  We also joined Discovery Health and later the Discovery Vitality Running Team which was pivotal in getting us from COUCH TO COMRADES.

3. Which goal do you most identify with?

Initially my main goal was being healthy but now it’s all about getting stronger.

4. How many km have you run per month in the last 3 months?  How does that compare with what you averaged last year?

I have run 474 kms since January 2018.  It’s pretty close to my figures from last year as I’m currently training for the Two Oceans and Comrades.

5. What injuries are you susceptible to?

Common ailments are low immunity and ITBS injuries.  Iliotibial Band Syndrome is one of the most common overuse injuries among runners. It occurs when the iliotibial band, the ligament that runs down the outside of the thigh from the hip to the shin, is tight or inflamed.  IT band pain can be severe enough to completely sideline a runner for weeks, or even longer.  Basically these injuries are due to the higher volume and intensity of the training.

6. What’s your brand of choice when it comes to running shoes and when do you need new ones?

Running shoes are the most important gear decision you’ll make, so make a concerted effort to buy a good pair of running shoes suited for your feet. I run in Asics Nimbus and generally get 500-600 kms out of a pair.

7. Who is your running support network?

I’m extremely blessed and fortunate to have the support of my husband, both my daughters and my in-laws.  My husband and I train and run together.  He was the one who suggested we start running 21km races.  I also have a running coach who supports me.

8. What training phase are you in right now?

High mileage starts now in order to peak for Comrades in June. Two Oceans Ultra is at the end of March.  Running is very much part of my lifestyle and it doesn’t end.  It is an all-encompassing routine that requires commitment, dedication and perseverance.

9. What are your top three things that you do to prevent injury?

I take supplements, fuel my body with wholesome food, stretch often and have regular massages. I’ve learnt that sleep is the most vital part of recovery.  You asked for three and I have given you more things but these points are essential for my life as a runner.

10.How do you stay motivated when you don’t want to run?

Running takes a considerable amount of discipline. My husband motivates me. Also I’m inspired by women like you, Amy Hopkins and veteran runner Deidre Larkin who is 85 years old.

11. What has been your running highlights?

My first race with my daughter will always hold a special place in my heart.  That was the start to my life as a runner.  The Two Oceans Ultra 2017 was another highlight.  For Comrades 2017, I raised over R13000 for the Pink Drive. I did complete the race but sadly it was just after the 12 hour cut-off. 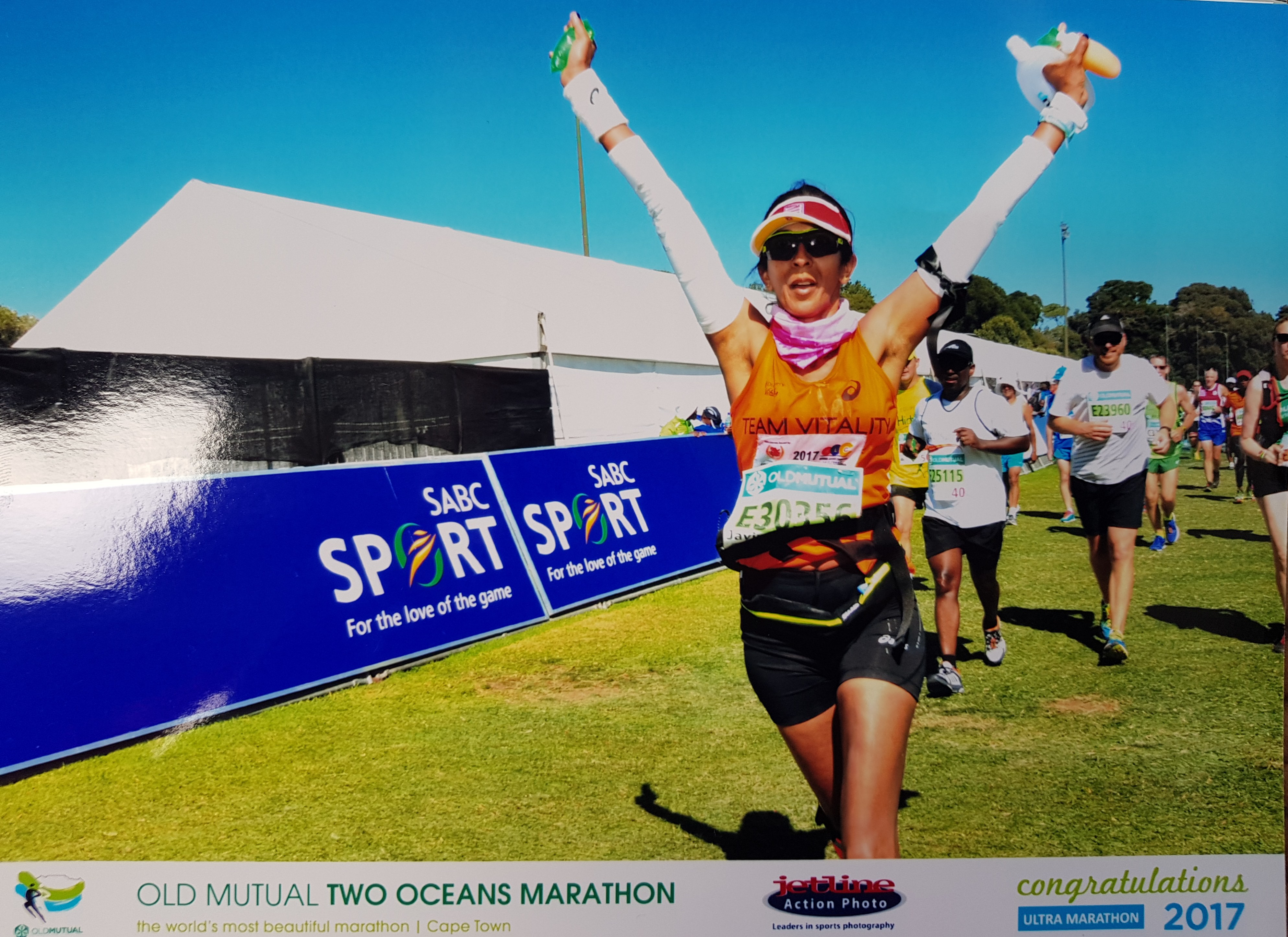 I have always been in awe of Jayindri and the fact that she is an Ultra-runner, a title she modestly acknowledges.  After chatting to her about the nitty gritties of running I have a new found respect and admiration for runners.  Aside from being a runner, she is an amazing mom and wife, and her family comes first, despite her hectic training schedule.  She teaches us that its never too late to chase those goals or try something new.  Jayindri is passionate about everything life has to offer, but the way she speaks about the women who inspire her, shows the character of a woman of strength.