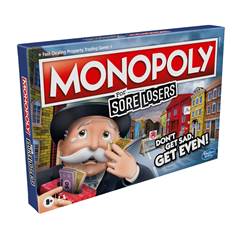 By: fitlikemummy
In: Our Entertainment
With: 0 Comments

Hasbro have recently released their Top Toys 2020 list and amongst those are board games. Monopoly for Sore Losers happens to be one those board games. The latest version of its iconic game is perfect for sore losers.

Say goodbye to the frustration of losing while playing Monopoly and say hello to the Monopoly For Sore Losers board game. This hilarious twist on the classic Monopoly game turns losing on its head and celebrates it instead.

Skylar my tween is absolutely Monopoly obsessed. As a result we have multiple versions of Monopoly. The latest edition, has provided the perfect twist and we absolutely love it.

READ : Another version we love is Monopoly Cash Grab

Monopoly for Sore Losers – The Twist

Sore Losers is the twist you have been waiting for.

Disclaimer : Hasbro South Africa kindly sent over Monopoly for Sore Losers in exchange for an honest and unbiased review from the boys and I.