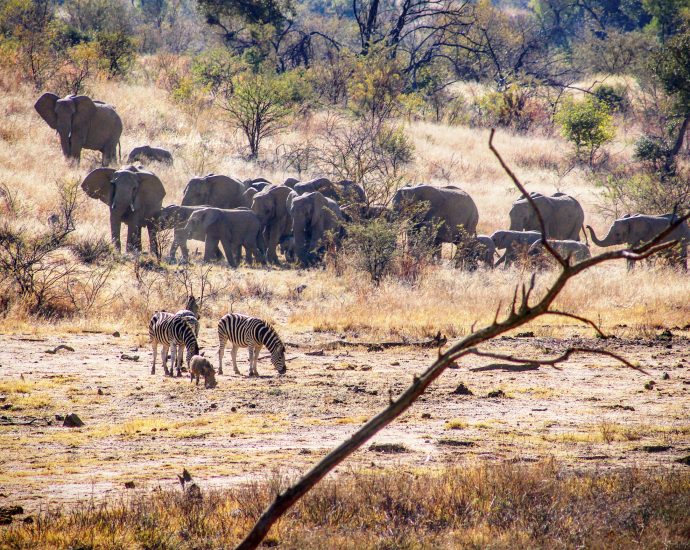 I am a girl bitterly in love with her country, its people, its landscape and certainly its wildlife. This past weekend I was incredibly blessed to experience the Big 5 Ultimate Pilanesberg Open Vehicle Day Tour with MoAfrika Tours. The experience included a day spent soaking up the beauty and wonder of the Pilanesberg National Park from a 4×4 safari vehicle.

The Pilanesberg Game Reserve is situated in a crater in the North West Province. This is something I learnt from our extremely knowledgeable guide Anton. This crater is the product of a volcano that erupted many millions of years ago. This extinct volcano has evolved to become one of the most fascinating landscapes for you to visit. It really is beyond beautiful and makes for the most incredible landscape images.

The early bird catches the worm

It was an early and chilly start to the day but in all honestly I didn’t mind, as I was relieved that MoAfrika has a shuttle service to Pilanesberg. This meant I didn’t have to drive all the way from Johannesburg. I made my way to the Hilton Hotel in Sandton where I was promptly fetched from the lobby at 06H15. I then joined the rest of the lovely people that I would be spending the day with. The drive to Pilanesberg Game Reserve from Johannesburg gave us the opportunity to get to know one another. Loads of laughs and casual banter made it a very entertaining drive.

We arrived at one of the gates to the Pilanesberg Game Reserve and were swiftly transferred to our Open 4×4. We were greeted by super friendly Anton who welcomed everyone and did a quick briefing. Before we knew it we were on our way and were animal spotting. I’ve been on several game drives but it was the first time I had witnessed the footprints of both lions and leopards in the wild. Anton’s explanation of what we were seeing was extremely educational and interesting. I have done self self-drive safaris in the past and I have probably driven over those footprints without even realising it.

I was amazed at the amount of sightings we experienced within the first 30 minutes of our drive. Game drives are unpredictable and it can be a waiting game, but this is where I give Anton loads of credit. Obviously an expert in his field, his knowledge of the Pilanesberg Game Reserve, the wildlife and their behaviours was very impressive.

We sat in anticipation waiting to see the big cats, especially after coming across their fresh footprints. We were told that the leopards were travelling in a pair as they were mating and all of a sudden, we came across a marvellous male leopard sitting on a large boulder. The female was also nearby in the tall grass. This is an extremely rare sighting as leopards are the least social of the African big cats. They usually keep to themselves, lurking in dense riverine. We were extremely fortunate as they crossed the road in front of us which allowed us an unique viewing opportunity. It was incredible to have experienced that but little did we expect to see another leopard. Three leopards in a space of 30 minutes, lets just say my day was made and my heart was content.

Lunch at the watering hole

We stopped at the restaurant for lunch. It was extremely busy so I’d say expect a bit of a wait on busier days. We chatted and watched the wildlife go about their day and it was the perfect opportunity to get some really cool close-up pics.

While it was lovely to sit in the warm sun for a bit, we wanted to see all of the Big 5 (elephant, rhino, leopard, buffalo and lion) before the day drew to a close. It wasn’t long before we came across a large herd of elephants with several calves. Baby elephants are just so adorable and I can spend hours watching them. We watched the herd move from the plains down to the watering hole while protecting their young from predators. Some walked on while others had dust baths or frolicked in the water.

I absolutely loved my first trip to Pilanesberg. It was a day with fantastic weather and incredible sightings. Africa is truly a magical place. A place I cherish and marvel with wildlife that constantly leaves me in awe.

A very special thank you to MoAfrika Tours for a wonderful day of discovering the Pilanesberg National Park in all her glory.

2019-07-11
Previous Post: Ethos Restaurant Set To Take Jozi By Storm
Next Post: Women take a stand with the “My Silence Counts” Movement