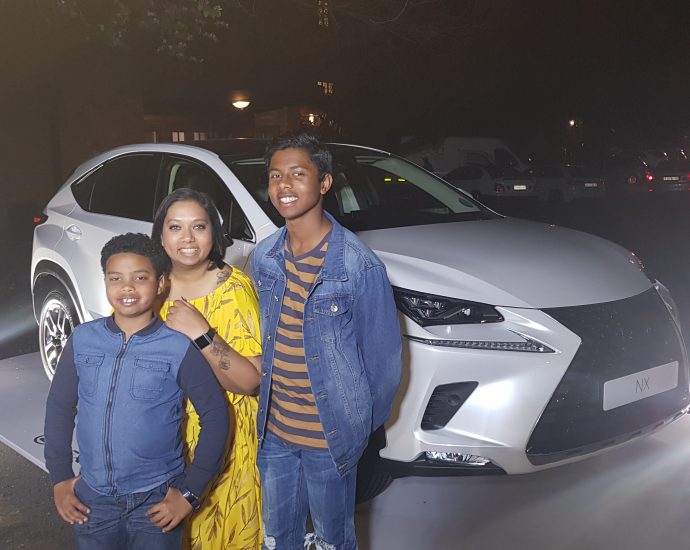 As an avid goer of Women’s Health events, being invited to the first ever Men’s Health South Africa Residency created much anticipation and excitement. Women’s Health does the most when it comes to events so I had high expectations. The main reason for my excitement was the fact that this event was for my guys. My guys are always tagging along to events I attend that are mainly aimed at women, but this time its different.

The Men’s Health Residency was held at the Wanderers Club on Saturday 31 August 2019. As the afternoon turned into evening, #MHResidency came to life with celebrity interviews, masterclasses, style workshops, delish food, followed by spoil after spoil.

The grand entrance couldn’t be missed with 3 of the latest Lexus beasts greeting event goers upon arrival . These cars are fearlessly authentic™ and I was hoping for a test drive. While I didn’t get that test drive, it’s definitely on my list of things to do.

We were on time, but the place was already abuzz with celebrities and fitness influencers. So many familiar faces had turned up for this event. While sipping on my Vida coffee, I bumped into Stefan Terblanche. I’ve spent copious amounts of time watching the former Sharks player, play incredible rugby. I’ve always been an mega fan of his so meeting Stefan Terblanche was my absolute ultimate highlight of #MHResidency. Known as the great finisher, Terblanche played in 37 tests for South Africa, scoring 19 tries, including a South African test record of four tries.

The on-the-couch fitness chat with previous Men’s Health SA Cover Stars was another highlight. The panellists comprised off Fez Mkhize, Joshua Capazorio, Alwyn Uys, Stefan Terblanche and Geo Botha. I loved the ease of the conversation which compromised of both playful banter and words of inspiration.

We got our healthy snack on, thanks to Montagu Snacks as we tucked into biltong and a variety of nuts. The biltong and nuts bar, a true South African sporting pastime was well received and made for an awesome accompaniment to the beer on offer.

I later caught up with Joshua Capazorio and his gorgeous fiance, as I wanted to find out if he has his own podcast. I honestly believe that his no non-sense, straight talk attitude is what teens of today need. I’d love for my son Ashton (15) to spend some time with Josh, as I’m convinced that he could be the break through we are looking for.

After the Tech, Innovation and Fashion Masterclasses we enjoyed the various brand activations that were available. While the boys got their hair cut at Gary Rom Man Signature Barber, we enjoyed the delicious food on offer.

Ashton and Skylar were living their best lives at the Men’s Health Residency. They enjoyed Magnum ice-creams while getting their sneakers cleaned at the ever popular Sneaker Shack.

There were loads of prizes to be won on the night and lucky me won a set of steak knives at the Whirlpool stand when I was eyeing out the new and improved Whirlpool Supreme Chef.

Our evening drew to a close with a stunning gin tasting hosted by Inverroche. It was a fabulous way to end Men’s Health Residency.

All in all it was an awesome experience and the boys were over the moon. They have made it abundantly clear that we will be attending all of the upcoming Men’s Health events. The concept is incredible and South Africa definitely needs more of it. We can’t wait for the next #MHResidency and strongly suggest you make a point to attend.