By: fitlikemummy
In: Fit Travels
With: 0 Comments

The festive season has always been extremely traditional with the same routine year after year. Hours spent cooking, entertaining, overindulging and with very little exercise, and the grand Christmas feast being the highlight of course.  This year however, close friends of ours invited us to join them on a camping trip for 5 days and we gladly accepted. It was our first camping trip as a family so with much excitement and as much uncertainty, we geared up for a festive season with a difference and headed to Loskop Dam.

I was concerned about veering off course, missing training sessions and unhealthy eating habits rearing its ugly head. After some thought I soon realised that there was actually no reason to be concerned. That in actual fact, this was the perfect opportunity. The perfect opportunity to be active despite being on holiday. Amazing summer days and nights, the beautiful outdoors and no distractions provided the ideal setting to stay motivated and on track.

Camping is indeed loads of fun but it’s also lots of hard work. The preparation, well thought-out minimalist packing, setting up of the camp site and let’s not forget the pitching of the tent, which should be pretty easy unless your brand new tent arrives without any instructions.

In my attempt to be active on a daily basis I took my yoga mat, one set of dumbbells and my brand spanking new Befit resistance bands along. None of these items took up any space so I had no reason to leave them behind. The idea wasn’t to do formal exercise daily but I did want to do a few workouts here and there. I’m naturally an early riser which turned out for the best due to the excessive temperatures. We went for early morning walks which was pretty cool considering that the Loskop Dam provides the most amazing scenic views. On the first day we also did a full body workout before the heat picked up. It was great to have company to exercise with and made it loads more fun. 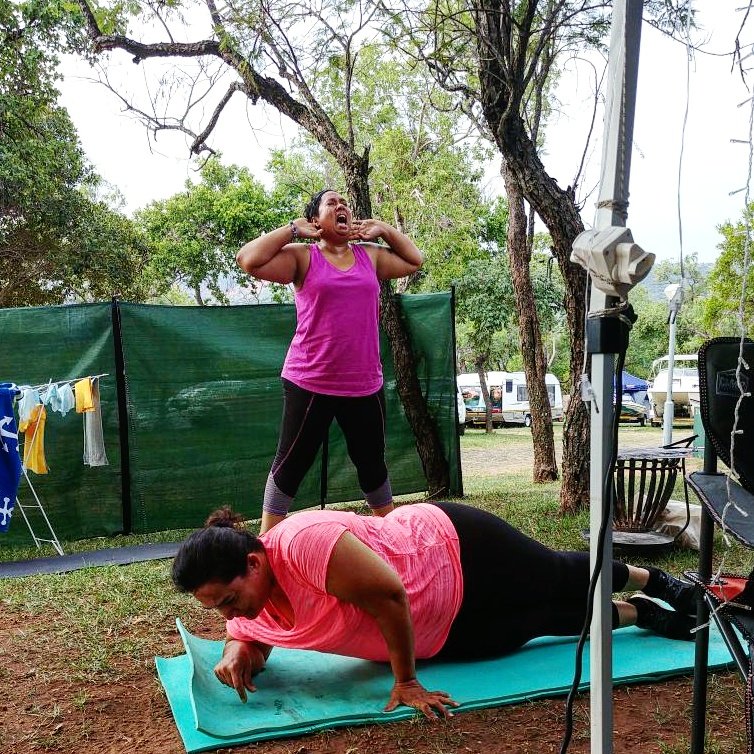 I also managed to squeeze in a workout on Christmas morning, however it was a little later than normal and it was exceptionally hot. I ended up with a severe case of heat stroke which resulted in me feeling extremely horrible. Headaches followed by vomiting saw me sneak away from Christmas lunch to rest it out on a hammock. In the past I would have just stuck it out and not listened to my body, but I no longer feel guilty about prioritising myself and resting when my body needs it.

For the Love of Fishing

Later that afternoon upon everyone’s return from lunch, we made our way down to sit alongside the dam while the men and kids did some fishing. We sat in the shade of the trees and enjoyed the breeze as it came off the water. Fishing is not really my thing but it was relaxing to just sit around and do nothing (something I don’t normally do).

Most of our time was spent swimming in an attempt to keep cool. We often swam several times a day as the kids couldn’t get enough of the water. I must admit that the cool water made those insanely hot summer days extremely pleasurable. Loads of fun in and alongside the pool was had, and it was great to horse around with the kids. I honestly think I got my fair share of vitamin D this festive season as I normally avoid the sun like the plague. 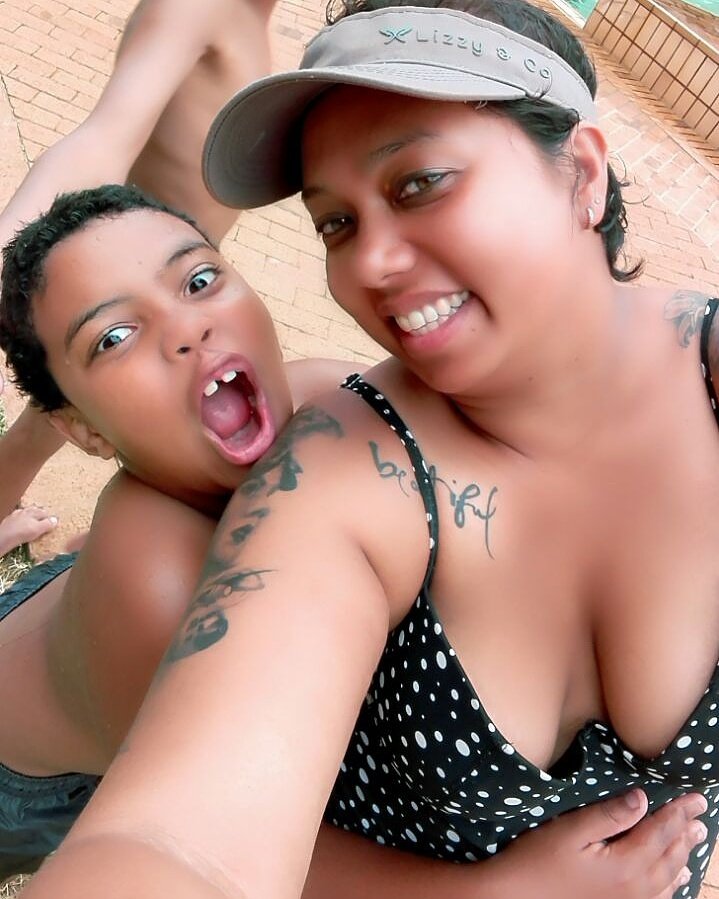 Due to the fact that I had heat stroke, I opted not to exercise the following day, but the resort is fairly big and we did do a lot of walking, clocking far more than 10000 steps a day. We also did things like throw a frisbee around and play putt-putt, which was more like adventure golf. Not the best of courses saw us constantly running after the ball in all directions.

The resort had organised a hike for the guests and we all joined in. The initial part of the hike was tough as it was a steep accent but it was so worth it. We started at 7am so it wasn’t that hot initially but temperatures peaked soon after. According to my fitbit the climb up was 40 odd flights of stairs. Upon reaching the top we were presented with a view of the Loskop dam which was absolutely stunning. It really was a beautiful sight to behold. 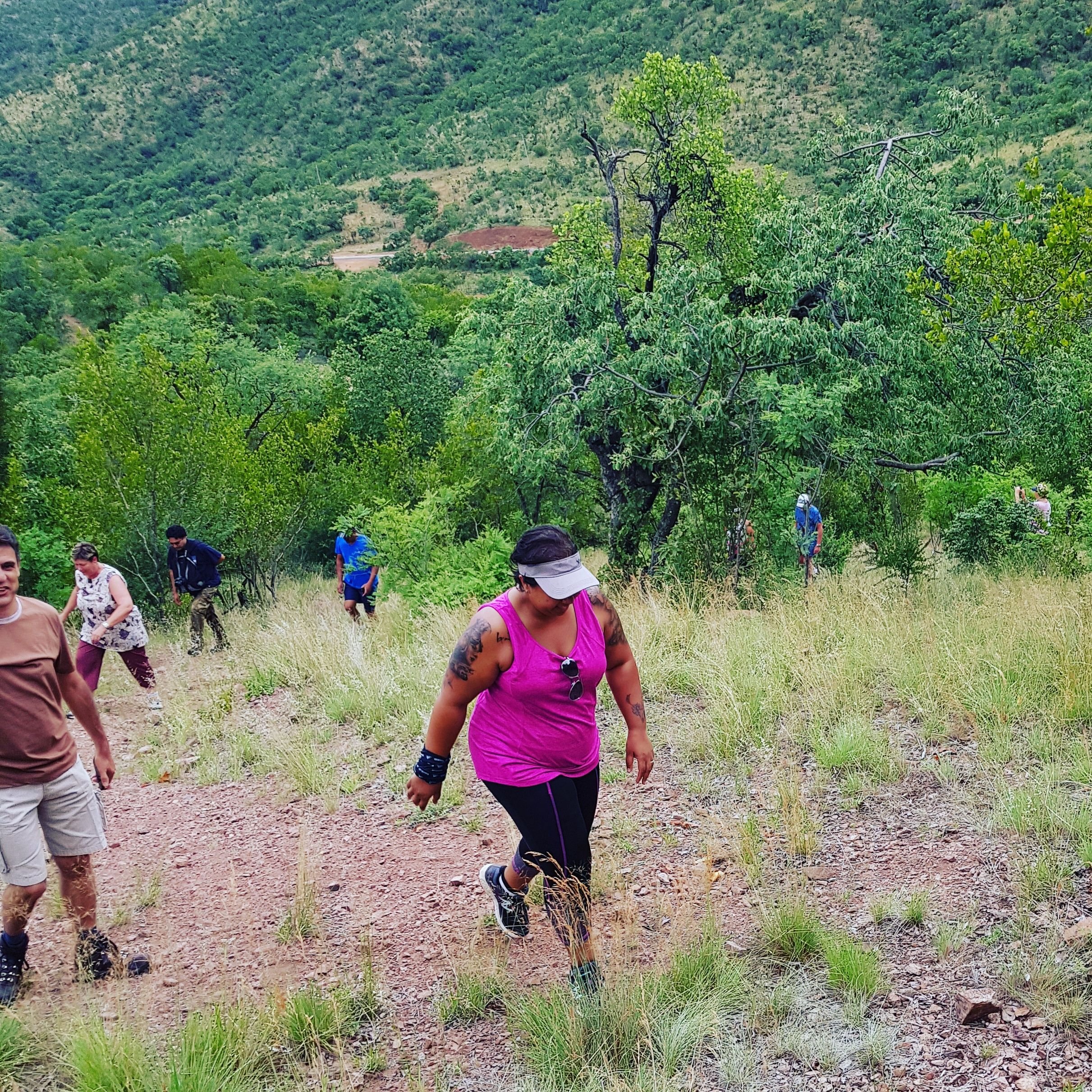 In terms of sticking to my plan of keeping active, I can honestly say “mission accomplished”. My eating on the other hand went for a loop as I didn’t eat my regular five small meals a day. I also ate far more carbs than normal and I drank more alcohol than l had planned on. I’m however not beating myself up about it. It’s life, I had a good time and therefore I have no regrets.

As a family we are always looking to try new experiences, and we got the opportunity to go rubber-ducking on the dam. Omg, it was amazing and we absolutely loved the speed. An hour and a half on the water kept us cool while providing us with pure tranquility. We even saw impala, kudu, monkeys, baboons and a fish eagle from the rubber duck. Pretty cool indeed. 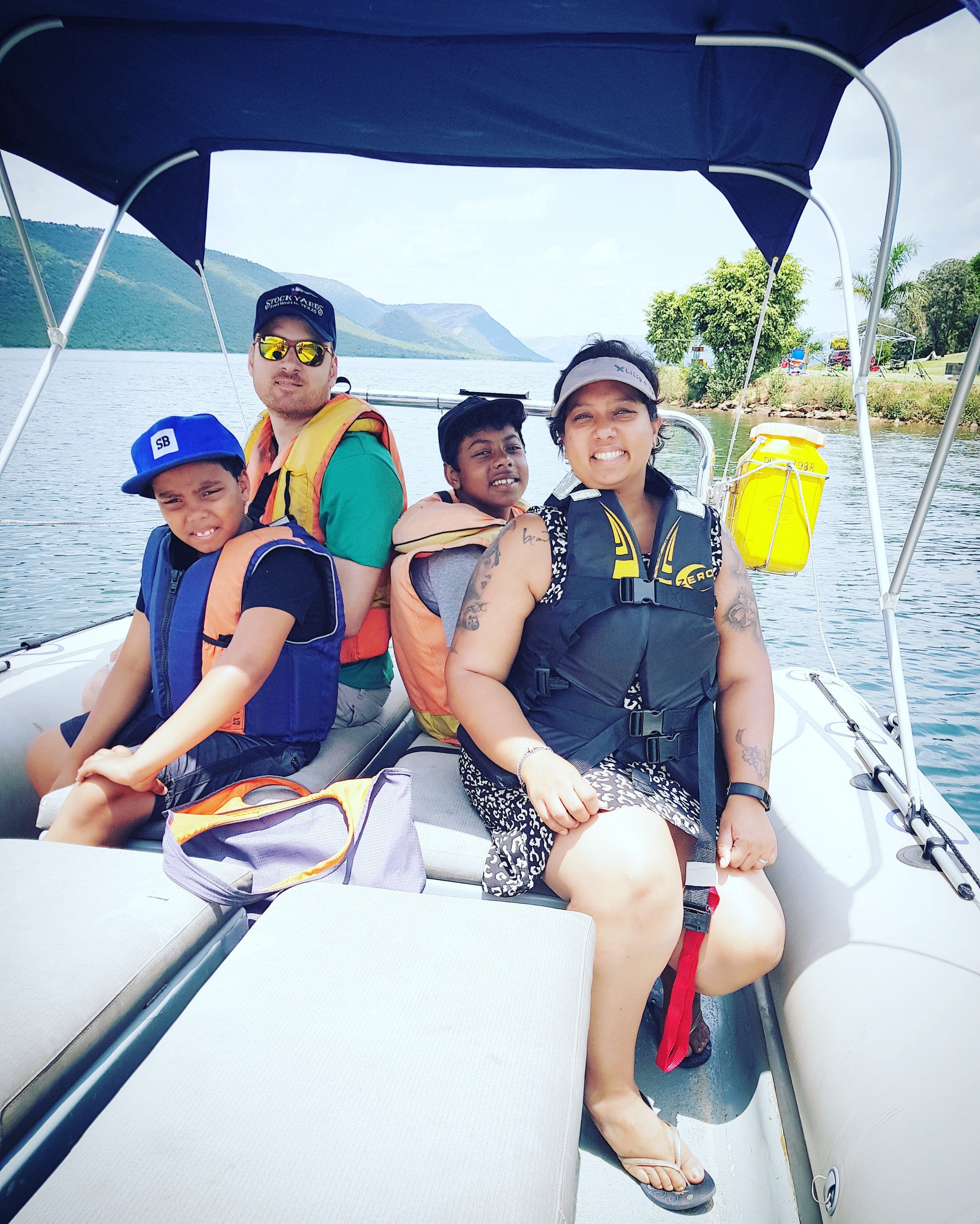 The other highlight of our camping trip was the lack of television, laptops and most certainly emails. We didn’t miss it one bit truth be told and that digital detox was essential, needed and very much welcomed. I did have my phone with me but usage was limited and used more as a camera.

My kids benefited just as much from this camping adventure as I did. The guys we went camping with, were awesome and taught them to fish. Fish were caught by both boys and a new skill was learnt. They were super chuffed with themselves. Ash is definitely more patient and the fisherman in the family. He even got me to try my hand at fishing (no photographic evidence of this though). Sky on the other hand is the fire-maker.  He loved learning to make a fire and now wants to make a bonfire all the time. These boys love the outdoors and really surprised me by they way they coped. No moaning, groaning, fighting or complaints of being bored. The highlight was probably the fact that I let them bath skip. As for the hubster, he had an okay time but the jury is still out on whether camping is his thing or not. As much as I’ve always been a self-declared city girl, I’m pretty adaptable and easy-going.

All in all we had an amazing time and really got to switch off and reset. It’s just what we needed as a family. 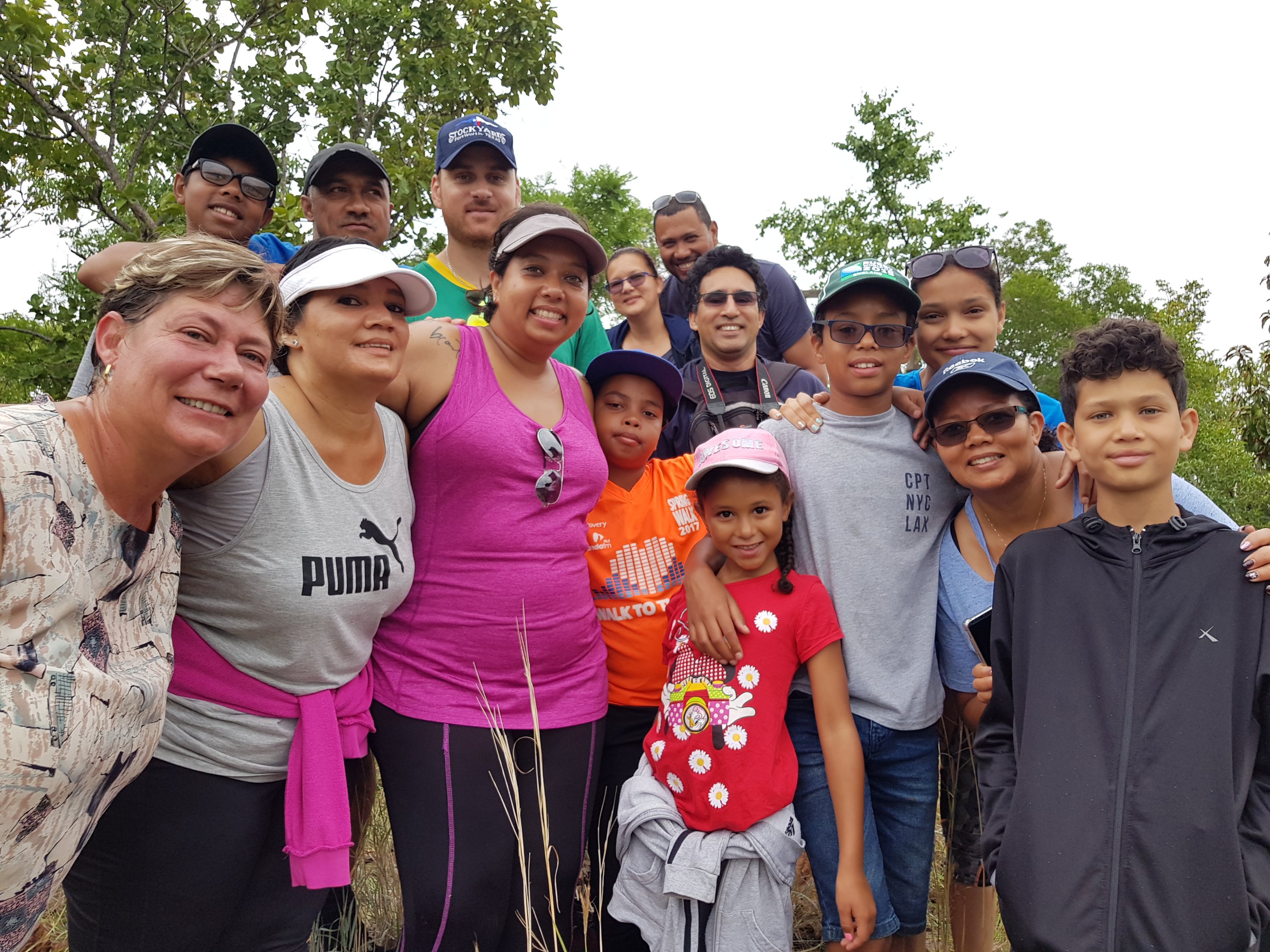 A very special thank you to everyone involved in ensuring we had an absolute blast on our first camping experience  We can safely say that we are looking forward to many, many more camping adventures.