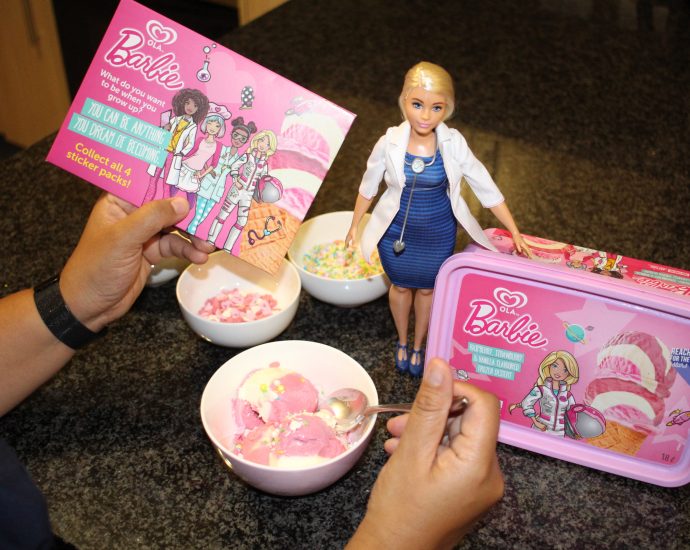 By: fitlikemummy
In: Kid, Women
With: 0 Comments

If anyone believes that girls should be inspired to reach for their dreams, it’s me. As a little girl, I did indeed have big dreams and honestly believed that I could be anything. I was the girl that refused to do needlework so that I could do woodwork class instead. The girl who played soccer, cricket and rugby, despite being told that girls couldn’t play those sports. I went on to be the girl who became a woman who worked in a male dominated industry. A woman who is a “disruptor” when it comes to stereotypes and the inequalities that women face. A woman who is an Aircraft Engineer, Aircraft Accident Investigator and Airworthiness Inspector. This is why the Barbie-inspired Ice-Cream Dream campaign got me in the feels.

Blue Horizon Licensing, the exclusive licensing agency for Mattel in South Africa, has teamed up with Ola ice cream to double the joy of indulging in a tub of creamy Barbie Ola ice cream, which not only tastes dreamy, but also aims to inspire Little Girls to Dream Big.

You can be anything campaign

I absolute love the YOU CAN BE ANYTHING campaign and all it stands for. Now that they have thrown ice-cream in the mix … a girl seriously can’t go wrong. The Ola Barbie ice cream tub, inspired by Barbie’s favourite colour, consists of three dreamy streams of ice-cream, strawberry, raspberry and vanilla, all swirled together to create the ultimate pink taste sensation.

The Ola Barbie tubs reinforce the message that girls, “You can be Anything”. The ice cream is packaged in four unique, career-themed tubs, decorated with artwork that aims to inspire girls to reach their full potential, seeing past traditional gender, race, and socio-economic barriers.

The collaboration between Blue Horizons and Ola has taken things to the next level by creating a series of collectable stickers that transform the empty ice-cream tubs into a variety of make-it-yourself play boxes that inspire career-focused play for girls.

The concept of the Ola Barbie Dream Boxes is pretty awesome. From yummy ice-cream ,to inspiration for little girls, to recycling, to encouraging them to use their imaginations to create and build something from nothing specifically in the STEAM (Science, Technology, Engineering the Arts and Maths) careers.

Hey girls, there’s a cherry on top of this ice cream dream, it’s that until 31 July 2019, young girls across the country will have the opportunity to win a dream career experience. The experience includes spending a day in her dream career, with an inspirational heroine. To enter, visit the Ola Facebook page and share your dreams.

Ola and Barbie believe that when every girl is inspired to dream big, the world will be a happier place. Share and let’s get the world to see the potential of all girls.#YouCanBeAnything